Net gains thanks to player sponsorship 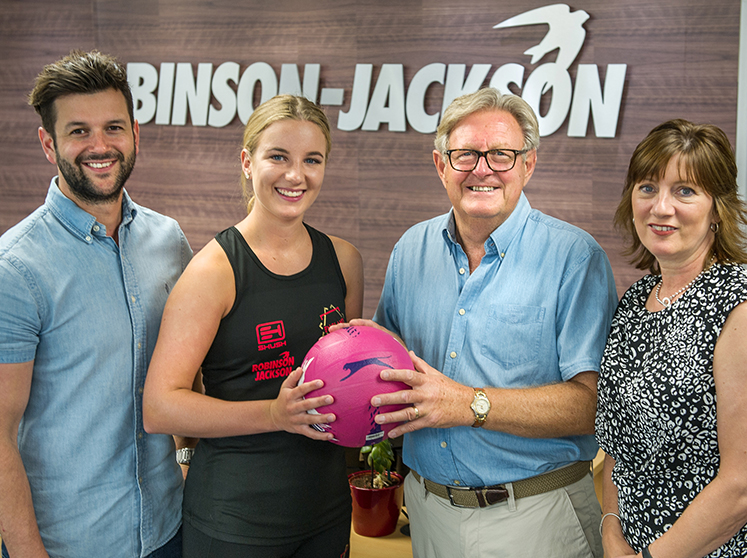 Active in the community took on a new meaning for Robinson Jackson, following the sponsorship of Emily Geear - one of England’s top nets players.

At the age of only 15 and while studying for her GCSEs, Emily found herself selected for England’s Under 21s squad destined for the World Indoor Netball Championships, held in South Africa in August 2019. With so little time to fundraise and desperate to secure her place on the plane, the Dartford Grammar student took to GoFundMe to raise money.

Emily’s efforts were brought to the attention of John Browning, a Senior Partner at Robinson Jackson, who decided to sponsor Emily and provide some of the money needed to fund Emily’s kit, accommodation, travel costs, physio and training in what was a completely self-funded trip.

As well as sponsoring Emily - who plays as a goal keeper – John, together with his Swanley and Dartford teams, took time out to attend one of Emily’s fundraising events. A quiz, hosted by Dartford Borough Councillor David Mote and held at Brandshatch Place Hotel & Spa, raised over £1,000 - which was split between Emily’s fundraising and the wonderful Ellenor Hospice.

“We’re always keen to support our country but when we discovered one of our top nets players was also a local Dartford Grammar student, we felt compelled to help. Becoming one of Emily’s sponsors has been an eye-opening experience, especially learning how each player has to pay out of their own pocket to compete,” says John. “We’re thrilled our contribution allowed Emily to join the England team. To hear her Super 7s under 21s squad were placed 4th in a packed international field and her under 21 Super 6s team rank third in the world has made us incredibly proud!”

John recently invited Emily to his Swanley office to learn more about the sport in which Emily excels (she was the youngest person representing England at the World Championships). The property team discovered that nets is the new version of indoor netball, played on a narrower court and on a felt-like surface.

A fast and furious game, the ball never goes out of play, instead rebounding off a high tension fence - or ‘net’ - that is placed around the court. Although most people would recognise aspects of the traditional seven-a-side netball game, Emily plays a form of nets called 6s, with six players on a team, only three playing positions and a court that is divided in half instead of thirds.

When not on international duty, Emily takes part in the London Pulse U17 Pathway, which identifies and supports talented netball players, and plays for Kent County Netball Club in both its KCNC 1 and Regional teams.